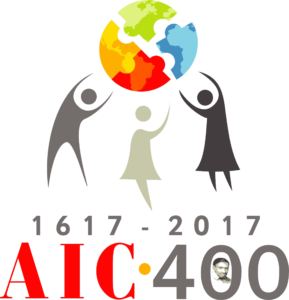 to find out more about what is happening in AIC today.

Located in Phibsborough, Ballyfermot and Belfast

Vincent de Paul established the Confraternities of Charity in Chatillon.

Founded in Ireland in 1843, they were first known as Ladies of Charity

Today AIC is a 150,000 strong body of women volunteering to combat poverty in 53 countries across five continents

In 1617, Vincent de Paul established the Confraternities of Charity in Chatillon. This was the first organisation he founded to care for poor and sick people. It is the oldest voluntary lay association of women and is dedicated to supporting vulnerable people both materially and spiritually.

Vincent was totally convinced of the need for the organisation and together with Louise de Marillac, with whom he worked closely, he paid particular attention to detail. As well as careful planning in caring for sick people in poverty, both Vincent and Louise were very attentive to the spiritual needs of the members of the Association.

Today AIC is a 150,000 strong body of women volunteering to combat poverty in 53 countries across five continents, and their mission is to represent the compassion of Jesus to people in need. Founded in Ireland in 1843, they were first known as Ladies of Charity.

After Vatican II, the Ladies of Charity went through a time of renewal. In 1971, at an Extraordinary Assembly, they decided on central government, adopted the name Association International de la Charité (AIC), and established their headquarters in Belgium. The Association has consultative status at the UN, UNESCO, ECOSOC, and the EU, thus enabling AIC to advocate on behalf of people living in poverty.

Today there are three branches in Dublin, Ireland – one in Phibsborough, the other one in Ballyfermot, and one in Belfast. Our hope is that new groups of women will come together throughout the country to further the works of AIC in Ireland.

Why not join AIC today? Together we can make significant changes to build a better world.