Jeanne Marie Rendu (later called Sister Rosalie Rendu) was the eldest of four girls in her family. Her parents were simple-living but well respected people who lived in the mountains. When Jeanne was only three years old, the French Revolution broke out in France. At this time, many faithful priests were forced to flee because people wanted to hurt them, and the Rendu family home became a refuge for many of these priests.

Following the death of her father and baby sister, Jeanne helped her mother to look after the family. Jeanne’s mother sent her to a boarding school so she could get a good education. During her two years there, Jeanne would walk around the town, and one day she discovered a hospital where the Daughters of Charity cared for the sick. Her mother gave her permission to spend some time at the hospital, and Jeanne soon felt called by God to become a Daughterof Charity.

When she was nearly 17 years old, Jeanne entered the Motherhouse of the Daughters of Charity and received the name Rosalie. She took vows to serve God and the poor, and spent over 50 years living out those vows. She opened a free clinic, a pharmacy, a school, an orphanage, a childcare centre, a home for the elderly and a youth club for young workers. She became known as the “good mother of all”, and helped Frederic Ozanam and his friends to do good works, which is how the St Vincent de Paul Society started.

As well as assisting the poor in the streets and in their homes, Sister Rosalie showed great courage and leadership during the bloody uprisings that took place in France in 1830 and 1848. During the battles, Sister Rosalie would climb up on the barricades – risking her life – to help wounded soldiers, regardless of which side they were fighting on.

Although her health was always fragile, Sister Rosalie never rested; she preferred to keep serving the poor, and managed to overcome fatigue and illness. Eventually, however, her huge workload – combined with her age and increased frailty – broke her resistance, and she became progressively blind during the last two years of her life. She died on 7 February 1856. 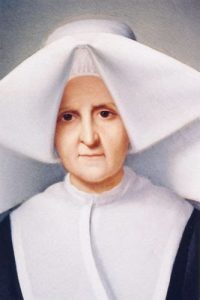