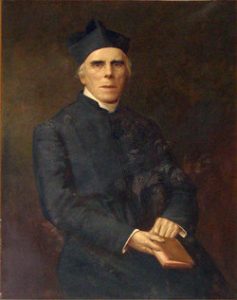 Fr. John Gowan CM was born in Skerries, Co. Dublin in 1817. First ordained to the priesthood in the Dublin Diocese, he later became a Vincentian, and was assigned to the Vincentian Mission Team in St. Peter’s Church in Phibsborough.

In 1853, while at St.Peter’s, he met Margaret Aylward. Margaret Aylward was a Lady of Charity (AIC). They both shared a concern for the welfare of the city poor. Fr. Gowan assisted Margaret Aylward in the founding of the new congregation of the Holy Faith Sisters. The congregation founded St. Brigid’s Orphanage, a non-residential but long-term family care system which provided fosterage for destitute children.  Schools were later established to provide education to thousands of the cities poorest children.

Margaret Aylward wrote that it was Fr. Gowan who was largely responsible for the idea of opening schools for the ‘most abandoned and most destitute children’ in Dublin.

The Sisters went on to establish a network of schools in Trinidad, in the West Indies, in the United States, New Zealand, Australia, Mexico, Peru, American Samoa & most recently Riwoto in South Sudan. 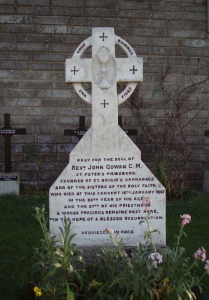