The following is the Homily given by Fr. Paschal Scallon CM on the RTÉ mass for the St. Vincent de Paul Society at the beginning of December:

In the last couple of weeks, the population of the world passed 8 billion. There are 8 billion of us looking to breathe and thrive on this planet. In another part of the universe, where an earth like ours may spin its way through time, our counterparts might marvel at how well they’re doing!

But, here, the news that we had passed 8 billion seemed to make us anxious. Is our flourishing actually going to be our ruin. We are afraid that we are too many, using too many of the earth’s resources and having to fall back into a smaller and smaller portion of the earth’s surface as more and more of the planet becomes uninhabitable.

In coming to such a despondent conclusion, we may have failed to distinguish between our ability to flourish and our capacity to be rapacious and exploitative. And, behind that lies a failure to appreciate our being human and living well in our own skin.

Mind you, human affairs can make our skin crawl. But, in our anxiety at reaching 8 billion, with all the implications for the planet, do we really imagine the world would be better off without us? Do we really hope for extinction?

There is another insight, a much more wholesome one – and holy at that – that affirms being human and affords it a dignity we may forget.

At the start of Advent, we begin to contemplate something still too big for the human imagination. Even the devout wrestle with what the birth of Jesus means. We creep towards Bethlehem and Christmas every year hardly able to believe.

Christmas, and the season of Advent leading up to it, and the several weeks afterwards bring us into the revelation that we find the deepest, most lasting confidence in our being human lies in the awareness that being made in the image of God, human beings reflect the image of God and the one who assures us of this is Christ himself, the Word, the wisdom, the nature and the character, the genius and creativity of the God we believe is the author of life.

If this is true, why would we concede that a flourishing humanity must necessarily destroy the earth?

The prophet Isaiah emerged in the history of Israel at a thoroughly bleak period for the Jewish people. But he speaks to them of return from exile and restoration of the blessing Israel always thought it had but had taken for granted. Isaiah affirms the light Israel is to the world and tells them; by their example the peoples of the world will hammer their swords into ploughshares and their spears into sickles.

Those of us here in the studio, celebrating Mass with you this morning, are members of the Society of St Vincent De Paul or other branches of the Vincentian Family. At the heart of what we do and why we do it is our determined belief that everyone in our country has a dignity, which must never be undermined or ignored. No one is meant to be cast aside or forgotten or made to feel it would be better if they did not exist.

The Vincentian tradition stands on the lives and service of people like St Vincent himself, St Louise de Marillac and Bl. Frederic Ozanam and so many others like Fr Vitaliy Novak, a Vincentian priest working in Ukraine.

Peace is not a pipe dream, neither for oneself nor the world. It can happen but it builds on the confidence we have in who we are before God and each other. If we can affirm each other in the small ways that strengthen our human dignity, we can deepen the faith that allows us live on the earth with belief in our capacity to do it properly and well, without being afraid of each other or of ourselves. 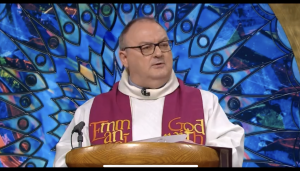