The Vincentian charism refers to St. Vincent de Paul’s and St Louise de Marillac’s way of understanding and expressing their experience of God’s presence and action in their lives. In the Gospel of St. Matthew, chapter 25, this identification of Jesus with suffering and poverty is expressed as, ‘whatsoever you did to the least of my brothers and sisters, that you did unto me’.

Vincent dedicated his life to the service of people in poverty and drew others to join him. In his own lifetime these included the Ladies of Charity (AIC), founded in 1617; the Congregation of the Mission (CM) 1625, and the Daughters of Charity (DC) whom he co-founded with St. Louise de Marillac in 1633. Later foundations of the Vincentian Family include the Society of St. Vincent de Paul (SVP) 1833, the Association of the Miraculous Medal (AMM) 1830’s, the Holy Faith Sisters (CHF) 1867, the Vincentian Partnership for Social Justice (VPSJ) 1995, Depaul 2002 and the Vincentian Lay Missionaries (VLM) 2006. 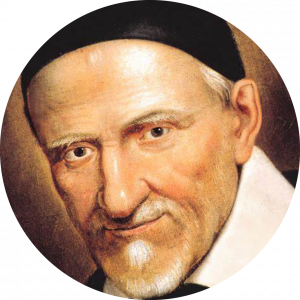 Vincent de Paul was born in 1581 into a peasant family in Dax in the south of France. He spent many hours as a boy herding sheep on the family farm. Vincent’s ability was recognised at an early age, and when the local pastor suggested to his father that he should be sent to school, his father sold a pair of oxen in order to pay school fees. Vincent was 4 years in school in Dax before going to the Seminary in Toulouse to study for the priesthood, and was ordained in 1600.

During the next 17 years Vincent spent some time as chaplain to Queen Marguerite De Valois, became acquainted with Pierre De Bérulle, was pastor of Clichy for a time and then became tutor to the family of Philippe Emmanuel de Gondi, General of the Galleys.

The year 1617 marks a watershed in the life of Vincent de Paul. There were two defining moments in that year, the first of which was his experience in Folleville. Vincent heard the confession of one of the tenants on the de Gondi estates. The man was so happy after making a good confession that Mme de Gondi became aware of it and asked Vincent to preach a sermon on general confession in the church in Folleville. So many people went to confession after the sermon that he had to get help from priests from the surrounding area. This experience moved him greatly and he described it in the following words: ‘In Folleville, I felt an interior movement of grace to devote myself to teach and serve the poor country people.’

Having left the de Gondi household shortly afterwards, he became pastor in Chatillon les Dombes. On Sunday 20 August he had a second experience that was life-changing. He was preparing to say Mass when a lady came to tell him of a poor family in dire need. He tells us that the story ‘touched him to the heart’. This led to the foundation of the first Confraternity of Charity.

He was persuaded to return to the de Gondi family. With the encouragement and financial support of Mme de Gondi, and in the company of Fr Antoine Portail, he set about giving missions on the de Gondi estates. This was the beginning of the Congregation of the Mission. At the end of each mission a Confraternity of Charity was established on the model of that of Chatillon les Dombes. And so the two experiences of 1617, formed the basis of his life’s work on behalf of people who were poor: taking care of their spiritual and material needs. The 1617 experiences also sowed the seed for the three communities founded by Vincent – the International Association of Charity, the Congregation of the Mission and the Daughters of Charity. The three communities spread to every continent bringing the charism of Vincent de Paul to the poor and marginalised all over the world. Vincent died in 1660. He was canonised in 1737.

Louise de Marillac was born 12 August 1591 in France. She was a member of one of the greatest noble families in France, the de Marillacs. However there was a shadow over Louise’s life as, born out of wedlock, she never knew who her mother was. When her father married in 1594, Louise was sent to a Dominican Boarding School in Poissy where she got an excellent education. When her father died in 1604, she was taken from the Boarding School and sent to a Boarding House in Paris.

Louise wanted to be a Capuchin Nun. However, she was told that her delicate health would not permit her to become a religious. Following the advice of her family, she married Antoine Le Gras on 5 February 1613. He was secretary to the Queen Marie de Medici. They had one son, Michel, who was often a cause of great worry to Louise.

Louise had a ‘LumiПre’ experience on the feast of Pentecost, 1623, which, she said, cleared her mind of any doubts she was experiencing. She was shown that a time would come when she would be in a position to make vows and that she would be in a small community in a place where she could help her neighbour and where there was to be much coming and going.

Her husband died in 1625, and around the same time she met Vincent de Paul, who was to become her director. Vincent soon became aware of the great talents of Louise, and he invited her in 1629 to be the coordinator of the Confraternities of Charity that had recently been established in France. Though she was quite frail, Louise undertook this work with courage and determination. It involved travelling through France on coach or by boat or sometimes on horseback. Sometimes she would find a Confraternity very faithful to its original spirit and at other times she had to gather the members together to bring them back to fidelity. She always kept Vincent informed of all she was doing and asked his advice.

Because the members of the Confraternities in Paris were noble ladies, it was considered unsuitable for them to carry soup pots through the streets of Paris, and they began sending their servants. Vincent and Louise did not like this, so when some girls from the villages expressed a desire to serve those in need Vincent and Louise decided to send them to help the Ladies in Paris who were running Confraternities. Louise took on the direction of these village girls bringing them into her own home. Eventually they were formed into a separate confraternity and known as ‘filles de la charité’. These Sisters went out through the streets of the city to serve people in need and at the same time lived in Community – the fulfilment of Louise’s ‘Lumiere’ experience. Louise’s life became totally centred on those who were suffering and in need: the sick in their homes or in hospitals, refugees, poor children who were abandoned or illiterate, and galley slaves. In order that these people would be helped, she formed her ‘filles de las charité’ as good servants of the poor. Vincent de Paul collaborated with her in all of this work.

Louise had a very strong devotion to the Holy Spirit, Our Lady, and the Sacred Heart. When Vincent de Paul became her director, she was scrupulous. In inviting her to become involved in helping other people, Vincent helped her to take the focus off herself. Louise died in 1660. She was canonised in 1934.